How To Steal A Hundred Billion Rand

Warning. This headline is incendiary and overstated by 4% for a nice round number. It is, hopefully, at the upper limit of likelihood.

The R99 debit order scams haven’t been in the news recently. You know, those small debit order deductions that hundreds of thousands of people get upset about, every few months. To clarify, these are people who are poor enough to miss a hundred rand but rich enough to have a banking app or phone the call centre to dispute the transaction.

There are, of course, also people who cannot afford to contact their bank when they don’t understand why #PCAL DR HOL MAY19 took their money.

And sadly, there are people who trust their bank to do its fiduciary duty and safeguard their money. If they don’t know what a deduction is for, they assume bank charges or a premium adjustment or something. If it contains an abbreviation that sounds like their bank, they’ll accept it and get along with fewer cans of pilchards and less sugar this month.

It is beginning to look as if people who are well-off, and companies, should be watching more closely, too. We need to pay attention to our money. We must know what gets deducted from our account, and whether it matches the relevant contract. The statistics don’t add up, if all the thefts are for R99. Rich people are getting ripped off, too.

The headline is based on two statements from the Union of Wolves Dressed Up as Sheepdogs (UWDUAS), more commonly known as the Payments Association of South Africa (PASA)

This is the first statement:

Let’s think about this. 276 people or companies stole an average of R7.5m each. They are a bank’s customers. So the bank knows who they are and where they live (because FICA). Where are all the charges of theft? How many are in court? How many are in jail? How many are permanently banned from ever collecting payment via debit order again? Why does PASA extrapolate from three months’ worth of history? Can’t their systems handle big data?

R6.75 was successfully stolen for every rand that was disputed.

Or, for every R99 scam you heard about, other people got scammed to the tune of R668.50 and they didn’t notice.

The maths suggests that the average values of these fraudulent debit orders are high. There are a few scenarios that could explain this.

People may be paying subscriptions twice, for example, once to the legitimate company and another to a fraud with a similar, and therefore recognisable, payment reference.

I’ve heard of rogue debit orders that call themselves bond payments, complete with a passable acronym for a bank.

Companies may be paying multiple cell phone contracts and fleet cards, without realising that there are seventeen instead of fifteen.

One might not notice a charge that looks like it could have been swiped at a place you visit often.

And I think many people open their bank statements once or twice a year.

Our money mindset and the measurement of our money is top-of-mind for me because I recently finished editing a new book called Money Talks, by Molefe Pooe. I highly recommend this comprehensive examination of money mastery, through a South African microscope.

The next bit involves careful assumptions from limited data. From the PASA Annual Report 2018, and limited monthly statistics I received from PASA, around 33 million debit orders were disputed in 2018, at a value of around R36 billion. The average value was R1 082.

Then there’s the second statement from PASA: 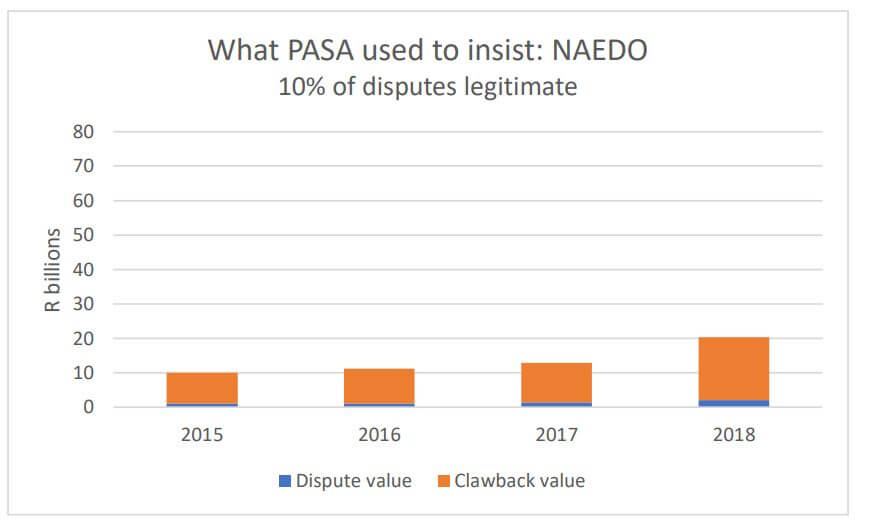 If 40% of total disputes are valid, it means 13.2 million debit orders for around R14.3 billion rand. 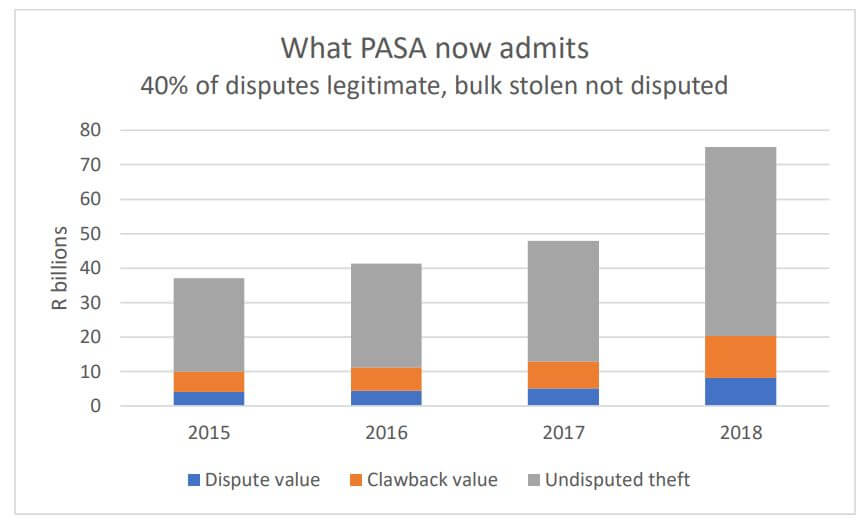 And here is a third statement to look at the low end:

After getting rid of “233 users”, eight hundred thousand fewer people complained. In one month. 9.6 million people per year, at an average of R854. This may be the source of the 40:60 admission, if it is based only on NAEDO debit orders.

If we consider only NAEDOs, the sum looks like this:

NAEDOs were about 28% of volume and 15% of the value of all debit orders in 2018. So this is rather optimistic.

Also, the banks should be able to recover the remaining 60% of invalid disputes from their clients. Some even threaten to fine you if you dispute frivolously. (These are labelled ‘Clawback’ on the graphs.)

You’d think we’d notice if the banks were trying to get this back. It is 17% of the 2017 fee income for the five biggest banks. 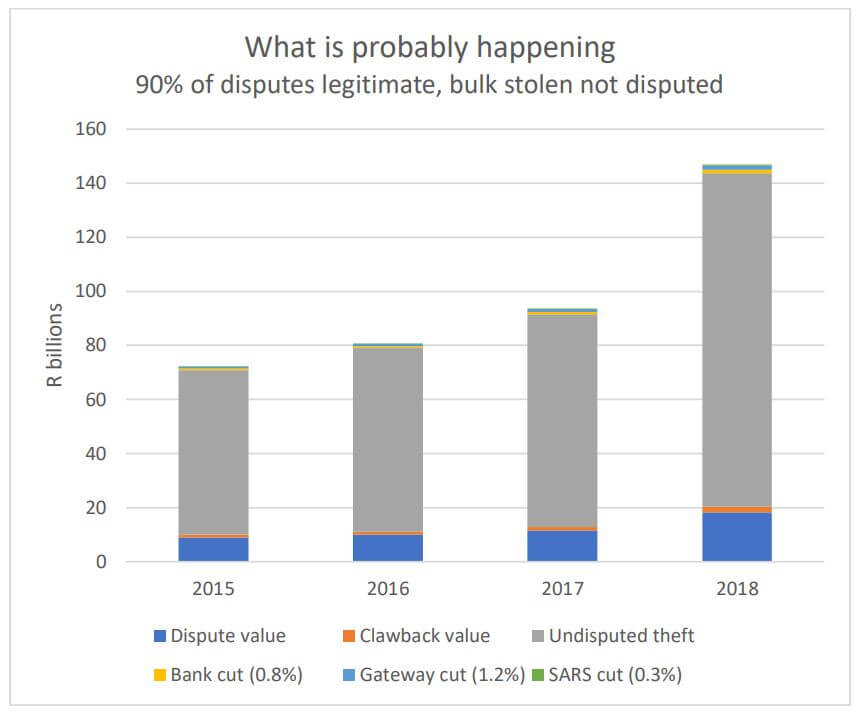 In the absence of transparent reporting from our regulatory body, which is strongly reminiscent of an Australian rugby ref in a match between South Africa and anyone else, the truth is probably somewhere between these two numbers.

What can I do?

I have been watching developments since May 2017, and there’s not much you can do.

You should check your bank statements and dispute rogue debit orders. Most of the automated dispute channels are limited to amounts under R200, so if it’s higher than that you’ll probably have to phone the call centre or go into the branch.

The dodgy rubbish that PASA accepts as a valid mandate means that you’re quite possibly paying DreamINC Roadside Assistance R169.00 two out of every three months, because in 2014 you once filled in your bank details ‘in case you win the prize in this raffle’. Or the cellular provider keeps debiting your account after the end of the contract because they somehow fail to record your repeated requests to cancel because you don’t want to upgrade.

Another problem is that the bank detail lists used by the rogues are very likely bought and sold. Once your account is on such a list, you remain vulnerable forever.

My only advice is to close the bank account and avoid debit orders like the plague. My husband and I have both done this. It’s not hard to pay via EFT every month, and then you can’t get NAEDO’d.

This last section details the inconsistencies and misdirection in PASA’s reporting. It doesn’t influence the calculations above.

The secret workings of the UWDUAS

Hanlon’s razor says Never attribute to malice what can be adequately explained by stupidity. PASA’s oddities may be a function of incompetence on the part of the association and/or its members, rather than purposeful obfuscation for predatory purposes.

I would love to use accurate numbers and do some calculations about how much the banks (estimate R880m), payment gateways (estimate R1.2b), and even SARS (estimate R312m, unless thieves pay VAT) make out of this.

Unfortunately, PASA is terrible with statistics. Given that they’re in charge of processing R10 trillion belonging to South African individuals and companies, in 1.36 billion transactions every year (Annual Report 2018 – Retail Volumes and Values compared with payment channel graphs), they seem very uncomfortable with decimals and precision.

Particularly, they avoid specifying whether percentages are of volumes or values. The graphs above are dubious for this reason. The dispute percentage for volume was applied to the values, which means they are an indication, at best.

PASA also lumps together all the debit order types for some statistics, but not for others, and they don’t clarify this. Again, my graphs are also guilty – they are only for NAEDO volumes and values.

Sometimes PASA removes troublesome months and offers averages for strange timespans. For example, December 2017 was inexplicably left out of one dataset, but was apparently when the all-time high of 2.3m disputes occurred. The same part of the October report says disputes increased by an average of 200 000 from the beginning of 2017, but that would put January 2017 at 100 000. The six months from June – November 2017 had an average of 2m NAEDOs each.

Last year I wrote an article about what I thought the rogue debit order industry was costing South African bank customers. I (very conservatively) came up with the number R1.6 billion.

The calculations and reasoning in that article still hold. The bank charges and payment gateway service fees may have changed a bit. The big problem is that all rogue debit orders are not R99.

The article was originally published on 14 January 2019. On 15 January, I received a press release from PASA, an MS Word version of the FAQs on their website, which insisted that “only about 10% of the debit orders disputed by customers are actually unauthorised.”

On 23 January, they asked why I wanted statistics about the percentage of disputes that get investigated. They had “put the request through and the team is busy with the dispute statistics.” When I explained, they stopped responding to me but, for some reason, added me to their mailing list.

In June 2019, this news started making the rounds. An investigation into organised crime syndicates, whose debit order scams amounted to ‘at least R1.6b’, was being undertaken by ‘the entire financial industry, the Hawks, the police and SARS.’

PASA’s Combatting Debit Order Abuse report came out in October 2019. I got the report, but not a press release. This may be because I am rather sarcastic about the usefulness (none) of DebiCheck which will most absolutely definitely maybe be completely in place well, soon, for sure-sure. It will still be voluntary for the 460 million EFT debit orders to the value of R850 billion.

Articles like this one and this one started appearing in December 2019, usually quoting the R1.6b, which doesn’t appear anywhere in the report. This might be because it is so conveniently low. My new estimates suggest that this is less than the banks’ and payment gateways’ cut.

The Changemakers in the National Payment System – The Next Chapter report hit my inbox in February 2020. Nobody in the media seems to have commented on it. I know it went out to a mailing list, because they forgot to BCC the recipients. So now I have the email addresses of everyone else who cares about PASA reports.

The lack of media interest in the report might be because it contains half a paragraph of circuitously useful information, and two pages of self-congratulatory excitement about implementing a process for banks to actually VET ‘entities’ that collect debit order payments. The Steering Committee was going to sign it off in April 2020, but, you know, Covid-19.

In preparation for this article, I submitted a request for statistics. I received an answer.

“Unfortunately, our statistics are made available to our members only, and we are therefore unable to share this information with you.” PASA members are the Reserve Bank and the retail banks.

I must attribute this quote to Walter Volkers, the CEO of PASA, who shared R12m in remuneration with three other executives in 2018. Everything in double quotes in this article was said by Walter Volkers, personally, as per my instructions from Leticia Mentz. No-one else in PASA says anything, apparently, even if they do.

Of course the UWDUAS no longer shares statistics. (Try saying the acronym aloud…)

It leads to annoying questions like ‘What proportion of disputes do you actually investigate?’

Oh, damn. Has anyone looked at the support queries recently? Okay, what about this year? Oh… Ever?

Or what about ‘Isn’t it part of a bank’s fiduciary duty to ensure that mandates EXIST and are not forged, PRIOR to releasing payment?’

Ugh, we only just got rid of the cheques with all that vexatious verification that a payment is, in fact, a true instruction from the person whose money we’re about to give away.

So, Mr Volkers, another annoying question for you.

Which part of your mandate to “organise, manage and regulate the participation of … members in the payment system…” covers your members abetting and profiting from the theft of almost 10% of payments processed through debit order channels?

Previous article In conversation with Gideon Joubert of Paratus about Bitcoin

Next article The Transformation of SA’s Covid-19 Curve

Zoom – A Security Review Of The Online Meeting App